The East Dorset Heritage Trust (EDHT), based at Allendale House in Wimborne, was set up to provide environmental education to the community. Between January and April Jennie is running three Art History courses at the fine Georgian house set in the centre of the market town. 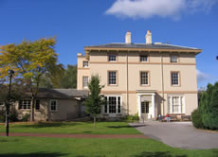 To book any of Jennie's EDHT courses mentioned below, please contact either SARAH EVANS or KIM HIETT at the EDHT:

Jennie's lectures at the EDHT are resuming on Friday 21 May 2021. Please check the website regularly to see any updates to the EDHT courses.

Born in Switzerland in 1741, Angelica Kauffman (1741–1807) was quickly recognised as a child prodigy, before receiving further artistic training in Italy. Arriving in London in 1766, she enjoyed an unprecedented career as a history painter and portraitist before moving to Rome in 1782, where her studio became a hub of the city’s cultural life.

Kauffman’s career was unusual for a female artist in the late 18th and early 19th century. A highly acclaimed portraitist, she identified herself primarily as a history painter, working for patrons across Britain and the continent, including Catherine the Great amongst others.

Wright has been acclaimed as "the first professional painter to express the spirit of the Industrial Revolution".  His paintings of the birth of science out of alchemy are a significant record of the struggle of science against religious values in the period known as the Age of Enlightenment.  He was also a painter of remarkable landscapes and portraits and is now considered to be one of Britain’s most interesting and wide-ranging painters.

Mondrian's rigorously geometric paintings in primary colours are icons of the 20th century and had a powerful impact on popular taste in art and design.  I will be tracing and explaining the evolution of his work from a more realistic style showing the influence of Luminism, through to Impressionism, Pointillism and most importantly, Cubism.

By 1965 an unprecedented number of Scottish women trained and worked as artists.  We will look at some stunning and innovative works by artists such as Margaret Macdonald, Phoebe Anna Traquair and Anne Redpath and sculptors such as Hannah Frank and Ann Henderson.

One of the most important artists of revolutionary France. Working in a politically turbulent Paris he witnessed the French Revolution, the rise and fall of Napoleon, and the Restoration of the French Monarchy.  From controversially seductive interior scenes, which saw him get into trouble with the authorities, to ‘first-of-their-kind’ everyday street scenes and clever trompe l’oeils, Boilly’s daring responses to the changing political environment and art market he encountered highlights his sharp powers of observation and wry sense of humour.

Intriguing, innovative and influential artist whose highly original works developed from Realism and Impressionism and went on to inspire the Neo-Impressionists such as Seurat and Signac.